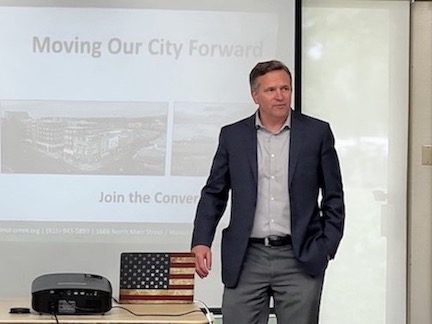 Dan Buckshi, City Manager of Walnut Creek, met with members of the Walnut Creek Seniors Club in the Civic Park Assembly Hall to give an update on the state of the city. Additional police officers had been hired. Many restaurants will be upgrading the popular outdoor dining spaces in downtown. Nordstroms had a good year financially even after the “smash and grab” robbery. A discussion is underway to find a more permanent solution to the street barriers near Nordstroms.

After the City Manager’s presentation to about 30 members of the Seniors Club, audience members stood up one by one to express their concerns over seniors’ issues. Several people pointed out that Walnut Creek is touted as a good place to retire, and a considerable part of the Walnut Creek population is seniors. (The US Census shows that 30.4 % of residents in the city of Walnut Creek were age 65 and over in 2020). These seniors at the meeting complained that the City does not have a Senior Center, while Concord and Pleasant Hill do. Walnut Creek has a “Community Center.” Seniors at the meeting argued that it is more than an issue of semantics. It is an issue of seniors feeing welcome. There was support both during and after the meeting to have the word “senior” added to the name of the “Civic Park Community Center.” Suggestions in group discussions after the meeting included “Civic Park Senior and Community Center” or “Civic Park Community and Senior Center.”

Some in the audience, at the meeting and afterward, expressed regret that there is no longer a senior presence in the Civic Park Community Center lobby. The Seniors acting as greeters are gone. Photos of seniors are gone. Many things that made seniors feel comfortable are missing.

Members of the Seniors Club Bingo Group had scheduling issues for the summer. A number of the Bingo Group members raised the issue of needing to have a room where their electronic Bingo Board would be available at each meeting so that hearing impaired seniors could more easily play Bingo.