Acclaimed bestselling novelist Kunihiko Hidaka is found brutally murdered in his home on the night before he’s planning to leave Japan and relocate to Vancouver. His body is found in his office, a locked room, within his locked house, by his wife and his best friend, both of whom have rock solid alibis. Or so it seems.

Shaker Heights, a placid, progressive suburb of Cleveland, everything is planned—from the layout of the winding roads, to the colors of the houses, to the successful lives its residents will go on to lead. And no one embodies this spirit more than Elena Richardson, whose guiding principle is playing by the rules.

Enter Mia Warren—an enigmatic artist and single mother—who arrives in this idyllic bubble with her teenage daughter Pearl, and rents a house from the Richardsons. Soon Mia and Pearl become more than tenants: all four Richardson children are drawn to the mother-daughter pair. But Mia carries with her a mysterious past and a disregard for the status quo that threatens to upend this carefully ordered community.

The Walnut Creek Senior Club Trivia Fanatics are holding their next trivia session via ZOOM on Wednesday  December 27, 2020 at 2:00 pm to 4:00 pm. It’s open to all seniors, but space is limited.  If you are interested, please contact Bob Mohler at bobmohler82@gmail.com. You will receive an email invitation with a link to the ZOOM session a day or so prior to the Trivia session.

If you are not familiar with ZOOM, we suggest you visit the following website for further information. The Website is: https://support.zoom.us/hc/en-us. You will also find links to test your equipment.

END_OF_DOCUMENT_TOKEN_TO_BE_REPLACED 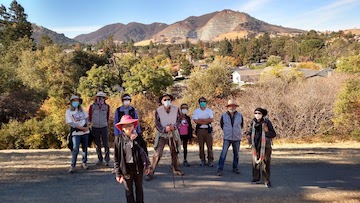 The Walking Buddies Group restarted limited hiking/walking activities a few weeks ago. During non-pandemic times, we hike on Tuesday and Thursday mornings, meet at the Community Center, pay a drop-in fee and carpool to the trail head. We usually hike in the local area. Tuesdays we walk on paved or graveled trails for about 4 miles or an hour to an hour and a half—usually easy walks. Thursdays are more strenuous and difficult. You need to be in good condition to hike 6 miles or a bit more for 2 to 3 hours.

Under the new rules imposed because of the virus, we are hiking only on Tuesdays for now, wearing facemasks, maintaining the recommended social distancing, agreeing to a revised waiver of liability, not carpooling and we are meeting at the trailhead. The drop-in fees are temporarily suspended and groups are limited to 10 each with a maximum of 20 hikers in 2 groups.

Above is a picture of the group taken on the Lafayette-Moraga Trail between Olympic Blvd. and Glenside Dr. on Oct. 6, 2020. Left to right: Sandy Ahart, Virginia Lombardo, Sal Lombardo and Jean Sillett. Other group members are behind and ahead of them. There were 16 of us. For more information contact Rolando at rsalazar94598@gmail.com.

The Let’s Sing Chorus will hold a free Holiday Sing Along on Zoom on Friday, Dec. 18. Each song is sung by a different singer. We will all click on “mute” and sing along at home with the performer.  Email Robin at rzzwolf@gmail.com to receive an email invitation with a link to join this Zoom event. You will also receive a emailed lyrics booklet of Holiday song lyrics that you can print at home.

Enjoy the magic of the holiday season with shimmering lights and holiday displays of wonder. Decorate your house, business and/or car with decorations from all faiths and holiday themes. Register your house and be entered into a Winter Holiday Decoration Contest. Every paid registration will be entered into a raffle for a drawing – winners to receive a gift card. All registrants are invited to email photos of their decorated item to be entered into a contest for “Best Decorations.” Submit your photo by 12/22 to ArtsRecEvents@walnut-creek.org. Prizes for 1st, 2nd, and 3rd place winners will be featured on social media platforms. All registrations will receive a map of decorated houses and businesses that you can peruse with your family to bring some holiday joy to the end of 2020!